SimRa now available in the southwest 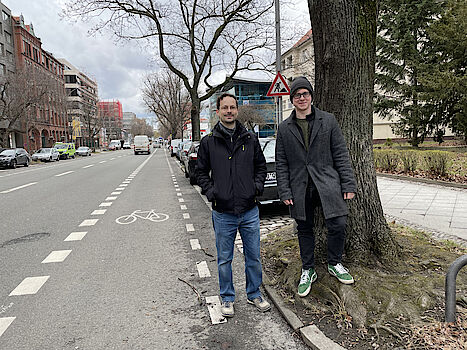 In the Berlin area, many cyclists have already registered with SimRa. Now, Südwestdeutscher Rundfunk (SWR) is launching a major campaign: cyclists throughout southwestern Germany are called upon to improve the traffic situation for cyclists. Citizens can use the SimRa app to document dangerous spots or exemplary traffic solutions or upload their findings to the SWR website. The data will then be forwarded to Karlsruhe University of Applied Sciences and the Technical University of Berlin for scientific evaluation. Starting on March 22, the first of the two SWR theme days on cycling, the reports received will be publicly available.

"The SimRa app we developed collects data in a data protection-compatible way on where there are clusters of hazards for cyclists in the city, the nature of these hazards, whether they are temporally or locally clustered, and where the main traffic flows are on bikes. We have already been able to win over numerous partners in the greater Berlin area," says Prof. Dr. David Bermbach, Professor of Mobile Cloud Computing at TU Berlin and ECDF, and initiator of the app.

The app can be easily downloaded for all common smartphones. GPS data is used to record cycling routes and acceleration sensors are used to detect dangerous situations, such as sudden braking, swerving or even a fall. After the ride, cyclists are asked to categorize and annotate these detected hazardous situations and to add any hazardous situations that were not detected. Only then will each individual bike route be uploaded and released on the project server.

As part of the cooperation with SWR, the data obtained from citizens, which can either be uploaded to SWR's websites or stored directly via SimRa, will be compiled and scientifically evaluated at both Karlsruhe University of Applied Sciences and TU Berlin. "Of course, we hope for a lively participation of cyclists* in the south of Germany. With the new data, we can continuously improve our app. This will benefit all app users," says David Bermbach. The data allows, for example, comparisons of which traffic problems have been regulated in different cities and how well, or where traffic policy can still learn something. "In addition, our incidence detection logic is improved the more different events are recorded. Last but not least, this data complements the open data base that traffic research throughout Germany is working with and based on which traffic models will also be developed in the future" the scientist is pleased about this participatory project.