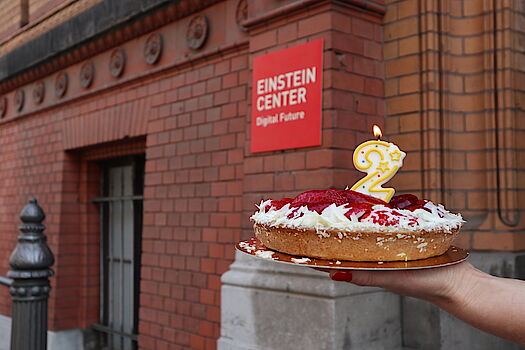 Whether it’s electronic textiles, cybercrime, AI-based procedures in medicine or road safety for cyclists, scientists from various disciplines conduct joint research at the Einstein Center Digital Future (ECDF) into issues related to digitalization. Since its opening in April 2017, the ECDF has become a pioneer in, and engine of, Berlin-based research in the field of digitalization. Today, the research center is celebrating its second birthday.

Michael Müller, Governing Mayor of Berlin and Senator for Science and Research, has congratulated the ECDF on the occasion of its second anniversary, emphasizing the importance of the research center for Berlin. “The ECDF is a real shooting star in Berlin. It contributes significantly to making Berlin Germany’s leading location for digitalization as well as the city’s ability to contribute to international developments. What should also not be forgotten is the important role the ECDF plays as an enabler in the development of new initiatives and in promoting cooperation in Berlin as a location for innovation. Congratulations on this successful work and best of luck for the years to come,” says Müller.

The ECDF currently hosts 27 professors who have been appointed to the four Berlin universities, Charité – Universitätsmedizin Berlin and two further institutions of higher education. “Our professors and their research groups fill me with enthusiasm. They have the courage to break new ground, to experiment with other forms of collaboration, and to think beyond the limits of their disciplines,” says Professor Dr. Odej Kao, speaker for the ECDF. Two further researchers have already accepted their appointments as professor; five appointments are in the negotiation stage; and seven appointments will be made in the near future. A further nine appointments are currently in the pipeline.

The ECDF wants to involve everyone in the digital transformation of society and to help shape a common vision for tomorrow’s world. “We want to involve people from diverse backgrounds in the discourse about technologies, about the goals of digitalization, and about questions concerning the basic principles that underlie today’s society,” emphasizes Professor Dr. Gesche Joost, member of the ECDF Executive Board.

Diverse research areas
Digital transformation is a major task for society. The research areas at the ECDF are correspondingly diverse: As part of the project “SimRa – Safety in Bicycle Traffic”, Professor Dr. David Bermbach is developing a smartphone app that collects data on near crashes. Professor Dr. Daniel Fürstenau und Professor Dr. Dr. Felix Balzer are investigating how data exchange can help reduce the number of elderly patients developing complications after surgery. In the project “B_B_Blockchain”, Professor Jochen Rabe and Professor Dr. Florian Tschorsch are exploring the possibilities and limits of digital participation processes. Professor Dr. Berit Greinke is dedicating her research to investigating how traditional craftsmanship and new manufacturing technologies can be combined. Together with Professor Dr. Helena Mihaljević, Professor Dr. Setareh Maghsudi and Professor Dr. Elisabeth Mayweg, she also initiated the ‘Women in STEAM’ initiative at the ECDF. This project aims to provide an inspiring platform for discussions to strengthen the representation of women at different career levels in the field of digitalization research.

The newest member of the ECDF is Professor Dr. Anastasia Danilov, who joined the research center on 1 April 2019. She is professor of Organizational Economics – Future of Work at Humboldt-Universität zu Berlin. “What I find most appealing about this connection to the ECDF is the unique environment, which enables direct interdisciplinary cooperation. I am glad that behavioral and personnel economics are coming together with other scientific disciplines in this regard to take their place in the shaping of the future,” she says.

HEIBRiDS, the ECDF’s and Helmholtz Association’s joint graduate program in the field of data science, was successfully launched last year with 13 doctoral students. “The training of junior researchers is of great importance to us, which is why we will be filling eight more Ph.D. positions this year,” says Professor Johann-Christoph Freytag, Ph.D., member of the ECDF Executive Board.

The research center receives valuable support from Professor Dr. Rita Süssmuth. The former President of the German Bundestag has acted as ECDF Ambassador since January 2019. “I’m very impressed with how the center addresses the complex challenges associated with digital transformation. The professors conduct their research in an interdisciplinary and creative manner, always keeping the public and society in mind. Especially worthy of note is the ‘Women in STEAM’ initiative started by female ECDF professors that promotes female scientists in the field of digitalization research,” she says.

The Robert-Koch-Forum
The Robert-Koch-Forum in the heart of Berlin plays an important role in this regard. The House of Digitalization brings together researchers from around the globe to develop their ideas for researching, designing and implementing digitalization. In the newly established Micro Factory, researchers work on design objects, models, and prototypes. The Future Security Lab invites visitors from politics, business and science, as well as members of the public, to join in and discuss interactive scenarios involving public security. “The exchange on topics such as organized crime on the Internet, virtual-reality applications for training emergency services, or evacuation routes of the future is of great importance to us,” says Professor Dr.Jochen Schiller, member of the ECDF Executive Board.

The house is open to different formats: In Hackathons, for example, students develop ideas for residential quarters in Berlin; in panel discussions, topics such as “digitalization and equality” are addressed; and at the Long Night of the Sciences, members of the public can experience first-hand what ECDF research projects are all about. “It’s great to see how the project has come to life over the past two years. We want to continue working passionately to fill the professor posts with excellent scientists and to provide fresh impetus for research in the field of digitalization,” says ECDF speaker Professor Kao.

About the Einstein Center Digital Future (ECDF)
The ECDF is an interdisciplinary project of Charité – Universitätsmedizin Berlin, Freie Universität Berlin, Humboldt-Universität zu Berlin, Technische Universität Berlin and the Berlin University of the Arts. This center for digitalization research sees itself as a cross-institutional nucleus for the research and promotion of digital structures in science, business and society. This interdisciplinary project in Berlin is creating more links in the field of digitalization, experimenting with new forms of cooperation, and concentrating on innovative, top-level, interdisciplinary research. The ECDF was sanctioned by the Einstein Foundation Berlin in September 2016.