How humans react to humanoid robots 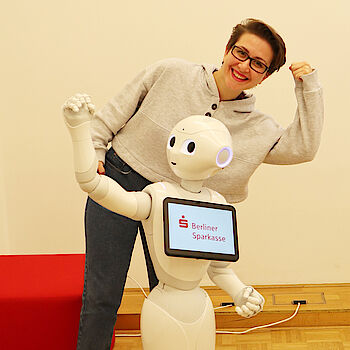 What emotions does a humanoid robot trigger in humans? A research team headed by ECDF Professor Daniel Fürstenau (FU Berlin) is currently investigating this question in cooperation with "Birds Nest", the innovation laboratory of Berliner Sparkasse, which has been in existence since 2017. At the Einstein Center Digital Future (ECDF), an experiment with the humanoid robot "Pepper" took place in early February 2020.

The experiment is part of the master's thesis of FU student Gabriella Volpe. "I want to investigate what emotions the interaction with the humanoid Pepper evokes in its interlocutors, where these emotions come from, and whether this has an effect on the general loyalty of the users to the company that owns the robot," she explains. The experiment will also test whether the results change when switching from a less intelligent robot to a more intelligent one.

After a short welcome and explanation of the procedure by Gabriella Volpe, the participants filled out a first questionnaire, which asked for general information about their origin, age, affinity to technology and previous experience with humanoid robots. "Afterwards the participants in groups of five to seven persons interacted as freely as possible with the humanoid robot. Among other things, they asked Pepper questions, listened to presentations, played an animal game with her, watched her dance and made selfies with her," reports Gabriella Volpe. In a second questionnaire, they were then asked about their interaction experiences and the emotions aroused in them. "Even though an exact evaluation will only be possible in the coming months, we can already say that the general perception of Pepper by the users is quite positive," says Gabriella Volpe.

Prof. Dr. Daniel Fürstenau is eagerly awaiting the results of the experiment. "Working with Pepper can promote further research in the field of artificial intelligence and help us better understand the possibilities and limits of the technology," he says.
A total of 46 participants took part in the ECDF experiment. Most of them came from Germany, but there were also participants from countries such as France, Italy, Taiwan, Lebanon, Russia, Namibia, the USA and Haiti.