With its establishment of four new professorships, the Einstein Center Digital Future (ECDF) is bringing together the most diverse disciplines and taking further steps to advance digitalization research in Berlin. The new appointments are conducting research in areas such as computer-assisted medicine, changes in the world of work, and biomedical imaging techniques. 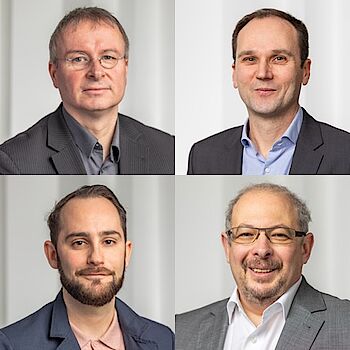 Professor Dr. Michael Gensch is the new professor of “Terahertz and Laser Spectroscopy” at Technische Universität Berlin and the German Aerospace Center (DLR). Professor Dr. Leonid Goubergrits holds the professorship of “Cardiovascular Modeling and Simulation” at Charité – Universitätsmedizin Berlin. Professor Dr. Tobias Schaeffter is professor of “Biomedical Imaging” at Technische Universität Berlin and the National Metrology Institute of Germany (PTB). Professor Dr. Philipp Staab has been appointed professor of “Sociology of the Future of Work” at Humboldt-Universität zu Berlin.
Professor Dr. Odej Kao, Executive Board member at the ECDF, regards the four new professors as a great enrichment for this center of digitalization research: “We’re getting closer and closer to achieving our goal of establishing 50 professorships at the ECDF, and we’re now able to cover important new fields of knowledge related to digitalization.”

About the newly appointed professors

Professor Dr. Michael Gensch
Since January 2019, Michael Gensch holds the professorship for “Terahertz and Laser Spectroscopy” at Technische Universität Berlin and ECDF. At the same time, he was appointed Head of Department for “Terahertz and Laser Spectroscopy” at the DLR Institute of Optical Sensor Systems in Berlin Adlershof. Born in Berlin, he studied at the University of Manchester and TU Berlin before moving to the ISAS – Leibniz Institute for Analytical Sciences for his doctorate. After various positions at DESY and at the BESSYII storage ring at Helmholtz-Zentrum Berlin (HZB), he became senior scientist and project manager for the setup and the scientific program of the TELBE THz user facility at the ELBE accelerator at Helmholtz-Zentrum Dresden-Rossendorf (HZDR) in 2010. From 2015 until his appointment at TU Berlin he worked as group leader "High-field THz driven Phenomena" at the Institute of Radiation Physics at Helmholtz-Zentrum Dresden-Rossendorf (HZDR). "My research focuses on instrument development for customized laser-based spectroscopy methods with applications in materials analysis, diagnostics at acceleration-based light sources and, in the future, on robotic missions to explore the solar system," says the scientist.

Professor Dr. Leonid Goubergrits
Professor Dr. Leonid Goubergrits, who was born in Moscow, has held the professorship of “Cardiovascular Modeling and Simulation” at Charité – Universitätsmedizin Berlin and the ECDF since 1 February 2019. At the Moscow Institute of Physics and Technology he initially studied applied mathematics and physics with a special focus on fluid mechanics and acoustics before switching to Technische Universität Berlin for his doctorate and Habilitation. “The focus of my work lies in strengthening the research emphasis on ‘cardiovascular computer-assisted medicine’ in connection with patient-specific modeling for the diagnosis and therapy of cardiovascular diseases. It is precisely the interdisciplinarity of this field of research, and the challenges related to it, that fascinate me every day,” says Goubergrits.

Professor Dr. Tobias Schaeffter
The beginning of January also saw Professor Dr. Tobias Schaeffter starting as professor of “Biomedical Imaging” at Technische Universität Berlin and as division head at the National Metrology Institute of Germany (PTB). He was born in Berlin, initially studied electrical engineering and computer science at Technische Universität Berlin, and later moved to Hamburg, where he worked as a researcher at the laboratory of Philips Research Hamburg. Since 2006, he has been professor of “Imaging Sciences” at King’s College London; in 2015 he also took on the role of head of the division of “Medical Physics and Metrological Information Technology” at PTB. “I’m particularly interested in biomedical imaging – such as, for example, imaging and reconstruction techniques in magnetic resonance imaging – for the purpose of measuring biophysical parameters that are used, for example, in the diagnosis and therapy control of cardiovascular diseases,” says Schaeffter.

Professor Dr. Philipp Staab
On 1 February 2019, Professor Dr. Philipp Staab took up his position as professor of “Sociology of the Future of Work” at the ECDF and Humboldt-Universität zu Berlin. Born in Nuremberg, Staab studied sociology, political science and psychology in Kassel, Germany, and at Paris Nanterre University. After completing his doctorate, he was involved, among other things, in various research projects at the Hamburg Institute for Social Research and at the Institute for the History and Future of Work, with the focus of his interest being technology research, social inequality, digitalization, and social security. In 2018, he worked as visiting fellow in the research group “Globalization, Work and Production” at the Berlin Social Science Research Center (WZB Berlin) and as acting professor of “Technology Studies” at the University of St. Gallen’s School of Humanities.