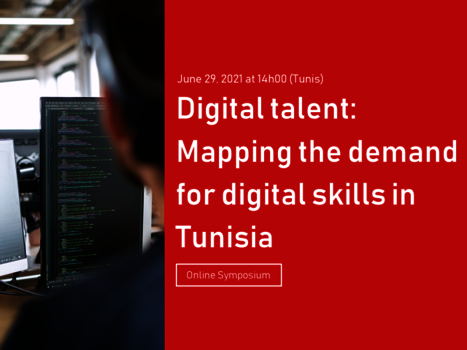 Tunisia wants to combat the country's high unemployment rate with a digital strategy. But which digital skills are actually in demand on the Tunisian labor market? Researchers in the team of ECDF professors Anastasia Danilov (HU Berlin) and Timm Teubner (TU Berlin) have investigated this question. On June 29, the two researchers Teo Firpo and Julia Baumann presented the latest white paper with research results on this topic.

In the joint research project of the ECDF and the Gesellschaft für Internationale Zusammenarbeit (GIZ), ECDF researchers are investigating the local platform economy and possibilities for job creation in the Tunisian and North African industrial and administrative sectors. After a brief introduction to the project, Professor Anastasia Danilov elaborated on the objectives of the project, "The aim is to provide GIZ with scientific data and evidence-based recommendations for action regarding the platform economy as well as the impact of digitalization in Tunisia."

"Tunisia has a high unemployment rate, even among university graduates it is at 30 percent. The Tunisian government has therefore set up a digital strategy to create more jobs while improving the digital skills of Tunisians. But what digital skills are in demand on the Tunisian labor market? That's what we wanted to find out in our project," explains Teo Firpo, head of the project. To answer this question, the researchers collected data from Tunisia's largest online job portal over the course of a year, obtaining almost 60,000 job ads, categorizing them according to digital skills and analyzing which skills are in demand. Forty-two percent of the ads asked for at least one digital skill, with "programming" being the most popular at 16 percent, followed by data science and data engineering skills.

Furthermore, the researchers found out that job advertisements demanding digital skills were mainly posted in the Tunis region. Fifty-two percent of the digital ads were posted in the capital itself, but surrounding areas also showed higher demand. In addition to digital skills, however, non-digital skills, such as customer service experience, are also in demand in the same advertisements. "Two specific recommendations for action can be derived from our data set: The most sought-after digital skill – programming – should be actively promoted, and the same applies to soft skills, as both are often in demand together," explains Julia Baumann.

More information about the research project is available //here.