Textiles and Sound: The Future of Opera? 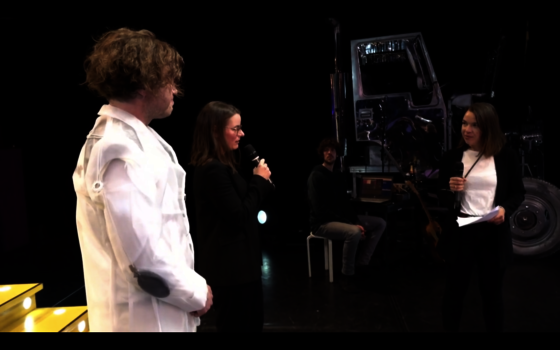 What might the opera of the future look like? What potential lies in digitization? What role does artificial intelligence (AI) play? These are the questions addressed by the oper.digital project. And if those involved in oper.digital at Neuköllner Oper have their way, simple streaming will be a thing of the past: In a total of seven shows by The Dean of Germany, experiments are being conducted at the interface of music and digitization. The audience is always involved, thanks to digital applause, crowd composing and fitness trackers, they take an active part in the show from home.

The Conductor Suit, a textile wearable developed by ECDF professors Emmanuel Baccelli, Felix Biessmann, Berit Greinke (who is leading the project) and others, is also used in most of the shows. The sixth show on 04 May 2021 was followed by the first laboratory, in which the background to the technical innovations was explained. Over a period of eight weeks, movement sequences by conductor Claas Krause of the VKKO (Verworner-Krause Chamber Orchestra) were analyzed in detail. The result is a customized interactive suit that will be used as a performative musical tool in the show: "The suit recognizes Claas Krause's gestures and can thus generate sound effects - almost like a portable instrument," explains Professor Berit Greinke. "For this, an interdisciplinary team of costume designers, textile designers, computer scientists, electrical engineers and other disciplines came together, all with very different research goals, which makes the work totally exciting." Thanks to AI, readjustments can also be made, because electronic textiles are less reliable than standardized sensor technology: textiles change, absorb moisture or expand, and each time the data received from the electronic textiles also changes. With the help of machine learning algorithms, new training data can also be fed in again shortly before or during performance.

Clemens Seemann, project manager of oper.digital, explains in conversation that digitization and opera are currently still seen as opposites: "With oper.digital, we want to inspire the digital generation for opera. To do this, we are looking for new approaches. A first step is the use of textile wearables or digital applause, so that the audience and the musicians are connected even though they are not in the same room," says Seemann.

What's next for the opera of the future? Berit Greinke still sees a lot of potential in the application context of the stage: "This is where different forms of communication and gestures come together, and I would very much like to explore more. We are currently working with various musicians to record their instruments," says Greinke. In the opera of the future, textile wearables for trumpeters, cellists and vibraphonists could conquer the stages.