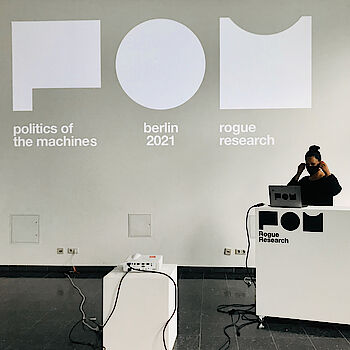 Within the international Politics of the Machines conference series – following Copenhagen (2018) and Beirut (2019), the third POM conference took place as a hybrid event based in Berlin on September 14-17, 2021, hosted by Michelle Christensen und Florian Conradiin the context of their shared chair for Open Science at the Technische Universität Berlin/Einstein Center Digital Future and the research group Critical Maker Culture at the Berlin University of the Arts/Weizenbaum Institute. The conference was carried out in collaboration with Aalborg University, Aalto University and the International University of Beirut.

The conference was comprised of a series of tracks and interventions that were generated based on an open call for topics, and brought together track chairs, speakers and interveners from 31 countries across Europe, Asia, Africa, North and South America, representing critical perspectives on technology (decolonial, feminist and sustainable approaches) across disciplines, as well as across and between art, design, science and civil society.

In a state of ontological crisis, all boundaries between human and machine, nature and culture, and the organic and inorganic have been severely blurred. These are times of curious contrivances, novel natures, inescapable automation, and posthuman performances – where human and nonhuman find themselves being entwined, meshed and muddled into new unwitting entanglements. But from biased machine-learning to surveillance capitalism and digital colonisation – what power-structures are implicitly and covertly being embedded into these technologies?

In a demand for more transparency, multiple movements are making a turn toward democratising knowledge and technology. They are exploring the potentials of open data, software, hardware and wetware to battle concealed hierarchies and partisan paradigms – eliciting a practice of counter-coding in a proliferating politics of machines. What chances or challenges might the democratisation of technology and knowledge elicit, and what potential do practices such as critical making, community science, trans/feminist hacking or citizen forensics hold to bend the hierarchies of power – how can we work with active matter and technical turmoil to re/act?

"'POM Berlin – Rogue Research’ aimed to probe new methodological approaches from art, design and activism within the framework of academia in order to surface an inter- and transdisciplinary terrain that attempts to exceed the boundaries of theory and practice, academia and activism, and science and civil society", Christensen and Conradi explain.

For further information on the detailed program see: