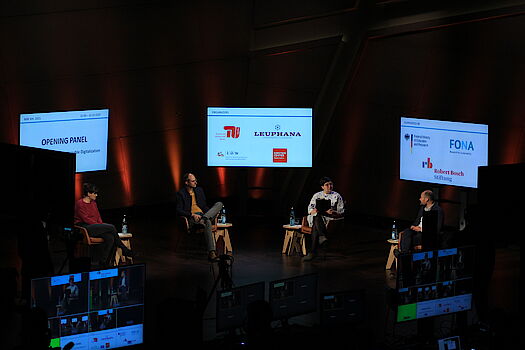 How can digitalization be shaped in a way that nurtures common goods and respects planetary boundaries? At the International Symposium “European approaches towards a Sustainable Digitalization” on May 6th, 2021, representatives from civil society organizations and science, as well as policy-makers came together in order to develop a European approach. The digital event was hosted by the Technical University Berlin (TU Berlin), the Einstein Center Digital Future (ECDF), the Institute for Ecological Economy Research (IÖW) and the Leuphana University Lüneburg.

The need for sustainable digitalization has been stressed once again by the EU Council, which, in December 2020, approved conclusions on how to shape “digitalization for the benefit of the environment”. Existing analyses show that current forms of digitalization increase resource demand and aggravate social inequalities. In order to change this, concerted action on the EU level is necessary: “We hope this symposium will push the debate, lift ambition and turn into ideas for collaboration across national borders. We believe this is essential in order to achieve a deep sustainability transition”, explains Tilman Santarius, professor at TU Berlin and ECDF, during the opening panel. Tilman Santarius, Daniel Lang from the Leuphana University Lüneburg as well as Friederike Rohde from IÖW, opened the event by emphasizing the importance of a specifically European approach in order to achieve sustainable digitalization: While Germany increasingly recognizes the need for a digital transformation towards sustainability, as of now, individual activities under the Green Deal are not enough but need goal orientation and policy actions, the three panelists agree.

During three parallel workshops, participants were able to dive deeper into certain questions. In the first workshop A three-level approach for a sustainable digital transformation, participants emphasized the need for regulation and a vision: “How can we make Europe both digital and green?”, Kim van Sparrentak, Member of the European Parliament (Greens/EFA), asked. In order to achieve this, individuals need to be empowered, a new perspective on commons needs to be developed and ethics in a digital environment need to play an increased role. Marc Schattenmann of the German Federal Ministry for the Environment, Nature Conservation and Nuclear Safety stressed the double load of this project: “It is a challenge to master two big transformations at the same time but absolutely necessary. While digital technologies have big potential to help us solve our environmental problems, they have a massive environmental footprint. Policy makers need to be made aware of this”. In addition, the civic society needs to be provided with the correct and accessible data in order to achieve a change in behavior.

Participants of the second workshop Forging a European interdisciplinary science network on digitalization and sustainability discussed a solution for the lack of knowledge transmission between various disciplines, despite the current momentum. Tilman Santarius introduced the Project Digitalization for Sustainability (D4S) of TU Berlin which aims to establish a solution to this: A European science network that delivers a comprehensive analysis of opportunities, risks and governance options regarding digitalization and sustainability; develops guidelines, policies and new institutions and outlines an inter- and transdisciplinary research agenda. The first panelists Angelika Hilbeck (ETH Zurich) and Mattias Höjer (KTH Stockholm) gave an overview of challenges within the sectors of agro-food, transport and building, and emphasized the need for a common agenda: “We need to be very clear on what we want and where we want to go. Technology is going forward full speed and the sectoral side is lacking way behind. We have to unite behind a transformation agenda and make sure that tech development is really in sync with sustainable transformation”, Hilbeck said. Höjer also pointed to the responsibility of research to highlight both, potentials and total consequences of digitalization and criticized current funding practices in favor of the first. Éliane Ubalijoro (Executive Director of Sustainability in the Digital Age) and Tim Unwin (UNESCO Chair in ICT4D) then agreed that what the discourse needs is more collaboration, especially across sectors and with policy makers, more reliable data on the impact of digital tools and, most importantly, a fast translation of the knowledge and ideas into real action. To have impact researchers must make sure that sustainability is included in already existing and future EU policies and there is no time left to act, the researchers settled.

The third workshop The 'Bits & Bäume Movement' goes Europe discussed, how civic society can become part of the process of sustainable digitalization on the EU level. “Literacy and social power dynamics shape who has a say and is heard within the discussion about sustainable digitalization – we need to make an effort to move beyond this”, Vivian Frick from IÖW, one of the organizers of the conference Bits & Bäume and the event series Forum Bits & Bäume, emphasizes: “It’s not enough to talk about technical details – we also need to make the connection between social justice and sustainability part of the discussion”. Marie-Kathrin Siemer from Liquid Democracy points out that digital participation can be a part of the solution: “It is independent of time and space, it’s scalable and indicates the level of participation: Were people merely consulted or part of decision making process?”. The panelists also discussed the need for concerted action: there are many similar processes happening within national borders but actors do not sufficiently communicate with each other, as Gauthier Roussilhe points out, designer and researcher at ENS Saclay.

The closing panelists Michelle Thorne (Mozilla Foundation), David Jensen (UNEP Digital Transformation Task Force), and Kim van Sparrentak (MEP, Greens/EFA) then discussed the vision for future collaboration: Academia and the scientific community need to set a focus on engaging with the civil society and actors like the tech industry in order to achieve real change. For Jensen, there is one central issue – the business model of big tech companies: “How can we regulate or get them to transform their business models towards sustainability? Currently, there are little incentives”. Michelle Thorne pleads for a holistic approach when it comes to the usage of digital tools: “The environmental impact of certain tools is not yet part of the equation, this needs to change. Carbon Accounting is central for sustainability”. All panelists agreed that a common assessment framework on the EU level is necessary, in order to achieve broad sustainability. But what will the future look like? “We need rules and regulations and ambitious proposals for a sustainable digitalization which will benefit businesses and society”, Sparrentak summarizes.