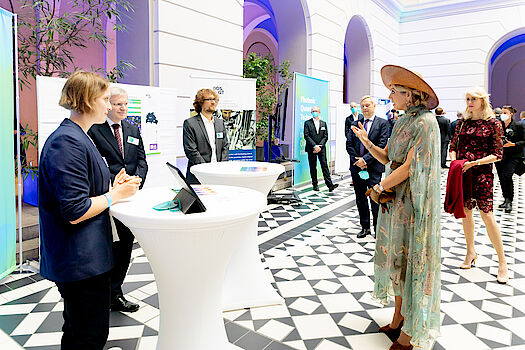 During their three-day state visit to Berlin on July 7, 2021, the Dutch royal couple learned about the topic of "photonics" at TU Berlin. Together with other scientists, ECDF professor Janik Wolters (DLR Institute for Optical Sensor Systems/TU Berlin) represented the graduate school BOS.QT (Berlin School of Optical Sciences And Quantum Technologies).
In the atrium of the TU's main building, the focus was on "photonics", a novel key technology that uses the special properties of light for displays or laser applications, for sensors in medicine or the fast and tap-proof transmission of data.

Janik Wolters is conducting research on the latter. Together with doctoral student Laura Orphal-Kobin, he represented the graduate school BOS.QT, where he is a member of the steering committee as a representative of the young scientists. Photonics is a very broad field of research with many, sometimes very different disciplines: "At the BOS.QT and the ECDF, we benefit immensely from the interdisciplinary character of the institutions and amazing ideas for future research projects emerge. Of course, I am very pleased when we are able to present the results to such distinguished visitors as the Dutch royal couple," says Wolters.
The official occasion for the royal visit was the ceremonial signing of an agreement for cooperation between the Dutch and Berlin-Brandenburg competence networks for photonics, "PhotonicsNL" and "OpTecBB", in the presence of the royal couple and the Governing Mayor of Berlin, Michael Müller. Benno Oderkerk, founder of the Dutch optics company Avantes and chairman of PhotonicsNL, therefore immediately translated the term "Lichthof" as "Photonics Palace". The president of the TU Berlin, Prof. Dr. Christian Thomsen, had already pointed out in his speech that this room, inaugurated in 1884 at the beginning of the industrial age, symbolically stands for change, progress and innovation.

A video of the event is available //here.