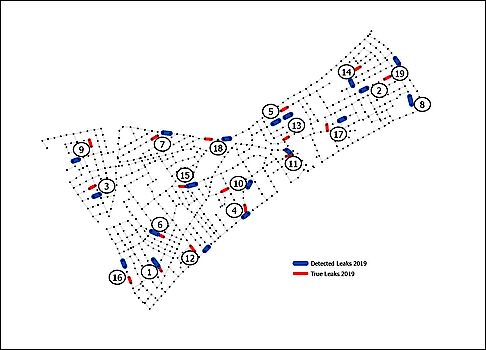 Open the tap, march the water: Drinking water is the most important basic food. Water supply networks ensure that consumers are continuously supplied with it. Mostly caused by aging and wear and tear, leaks in water supply systems deteriorate their infrastructure and cause water losses estimated at 39 billion US dollars per year worldwide. In their new research project LILA (Leakage Identification and Localization Algorithm), Ivo Daniel, Research Associate at the Einstein Center Digital Future (ECDF) and at the Smart Water Networks Department at TU Berlin, Prof. Dr. Andrea Cominola, ECDF Professor for "Digital Networking of Water and Wastewater Systems" (Smart Water Networks) at TU Berlin, and colleagues developed the use of a sequential, pressure-based algorithm to identify and locate these leakages.

In the worst case, no water reaches the consumers at all. Quickly identifying and locating a breach is essential to ensure basic supply, but also to minimize or even completely avoid consequential damage, such as flooding. "Unlike above-ground infrastructure such as roads, water distribution systems are underground, which makes identifying damage much more difficult. At the same time, the purity of drinking water is a top priority: "The use of equipment such as cameras in the supply pipes is therefore out of the question," explains Ivo Daniel. While pipe bursts are easier to detect due to the sudden change, creeping seepage losses are more difficult to identify.

As part of an international competition, Daniel and his team developed the LILA algorithm to identify and localize leaks in the first step; colleagues at North Carolina State University then turned their attention to the second step of pinpointing the exact location within the supply system. Using the reference dataset that formed the basis of the competition, the scientists* developed the algorithm that calculates and compares pressure losses based on water pressure measurements. "The pressure drop is not the same everywhere, so this allows us to identify which sensor in the water supply system is closest to the leak," Daniel said. LILA can identify all seepage losses in the data set and locate them within a maximum distance of 374 meter from their actual location. Abrupt leaks are detected immediately or within 2 hours; more time is needed for leaks that grow more gradually.

"In the model of the supply network, which was provided to us as part of the competition, water losses amounted to about 20 percent a year due to leaks. This means that of the water that is pumped into the system, 20 percent is lost before it reaches the consumers. With our algorithm, we've been able to reduce that to 0.01 percent," says Daniel. In addition to increased revenue, timely remediation has other benefits, such as reduced energy demand, less environmental impact, and increased customer satisfaction.