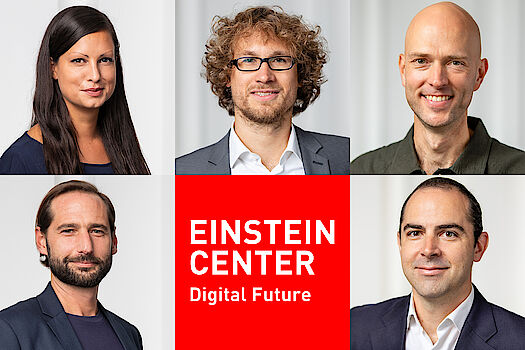 Prof. Dr. Odej Kao, Chairman of ECDF, attaches great importance to international cooperation in science and research. This is significant in order to further develop Berlin as an attractive location for digitalization research. "Our new professors have researched at the École Polytechnique in Paris, the French research institute Inria, the ETH Zurich and the Georgia Institute of Technology or worked at the United States Congress in Washington DC. The expertise they gathered will enrich research and teaching at ECDF," he says.

Prof. Dr. Emmanuel Baccelli has been ECDF Professor for "Open and Secure IoT Ecosystem" at Freie Universität Berlin in cooperation with Inria and ECDF since September. Prof. Michelle Christensen and Prof. Florian Conradi jointly took up the ECDF Guest Professorship for "Open Science" at Technische Universität Berlin in August. Prof. Dr. Guillermo Gallego has held the ECDF professorship for "Robotic Interactive Perception" at the TU Berlin since September 2019. Prof. Dr. Janik Wolters has been ECDF Professor for "Physical Foundations of IT Security" at the TU Berlin and the German Aerospace Center since July.

About the newly appointed professors

Prof. Dr. Emmanuel Baccelli
Since September 2019, Emmanuel Baccelli has been Professor for "Open and Secure IoT Ecosystem" at Freie Universität Berlin, in partnership with Inria and the Einstein Center Digital Future (ECDF). In his research, he is investigating how low-power protocols and deeply embedded open source software can improve the functionality and the security of the Internet of Things (IoT). "The trade-off between energy efficiency and security is a key technical challenge for IoT,” says Baccelli. His research not only focuses on technical aspects. “Issues also affect the privacy and the sovereignty of users, as well as transparency", he says. Emmanuel Baccelli received his PhD in 2006 in Paris from the renowned École Polytechnique on "Routing and Mobility in Large Packet-Based Networks". In his thesis, Baccelli investigated the compatibility of classical Internet concepts with the inherent limitations of ad hoc wireless communication.

Prof. Michelle Christensen
Michelle Christensen has been Professor of Open Science at ECDF and TU Berlin since August 2019. She is a sociologist and designer exploring the spaces in between these realms. Her research interests include trans- and postdisciplinarity, the politics of objects, and the democratic potentials of free and open technologies. Michelle Christensen wrote her Ph.D. in the field of Design Research at the Berlin University of the Arts. Previously, she worked at the Design Research Lab (UdK Berlin), the German Research Center for Artificial Intelligence (DFKI) and is currently leading a research group on maker culture at the UdK Berlin together with Florian Conradi as part of the Weizenbaum Institute.  She has taught courses in conflict analysis, gender studies and design methods at universities in the Netherlands and Germany, most recently as a visiting professor at the international master’s program (MAID) at the Anhalt University of Applied Sciences in Dessau.

Prof. Florian Conradi
Florian Conradi has been professor at the TU Berlin and the ECDF for "Open Science" since August 2019. In his research, he combines critical theory and design practice as an approach to the explorative method of critical making. Using the means and principles of free and open technologies, he explores the politics of design within the digital society. Since 2008 he has been initiating sociopolitical design projects with institutions in the field of critical media and political advocacy, carrying out field research in Europe, as well as in the Middle East, East and West Africa. As a research associate, he has worked for the University of Applied Sciences Mainz, the Design Research Lab at the UdK Berlin, the German Research Centre for Artificial Intelligence – and together with Michelle Christensen, he currently heads a research group on maker culture at the UdK Berlin as part of the Weizenbaum Institute. He has taught critical approaches to design and design methods at amongst other places the Köln International School of Design, the UdK Berlin, and most recently, as a visiting professor at the international Master program in Integrated Design at the Anhalt University of Applied Sciences in Dessau.

Prof. Dr. Guillermo Gallego
Guillermo Gallego has been Professor of “Robotic Interactive Perception” at TU Berlin and ECDF since September 2019. The Spaniard previously worked as a postdoctoral fellow at the Department of Neuroinformatics of the University of Zurich and ETH Zurich. From 2005 to 2011, he conducted research as part of the Fulbright Program at the Georgia Institute of Technology in the USA, where he received his doctorate in 2011. The focus of his research work lies on at the intersection of robotics, computer vision and applied mathematics, with an emphasis on optimization. “Broadly speaking, my focus is on robot perception using cameras, and on optimization methods for interdisciplinary imaging and control problems”, explains Gallego. Within the framework of his ECDF professorship, he wants to focus on improving the perception system in robots. “As sensors (such as cameras) and processors become cheaper, smaller and better, they also become more ubiquitous. This is something that we observe in everyday life, on our smartphones. It is also the case of robots and remote sensing networks”, says Gallego.

Prof. Dr. Janik Wolters
Quantum communication for most people is a concept they associate with the future. Professor Dr. Janik Wolters is a step ahead: Wolters, who is ECDF professor of Physical Foundations of IT Security at TU Berlin and the German Aerospace Center (DLR), is researching the technological possibilities for securing quantum communication against eavesdropping, even over long distances. His research focuses on the development and investigation of quantum memories and quantum light sources, that is to say, on key components in quantum technology. In his work in Berlin and at ECDF, Wolters has almost ideal conditions for this purpose: “Anyone targeting to develop secure communication, absolutely has to have contact to prospective users and related technologies. In this respect, I anticipate an intensive exchange of ideas with my colleagues at the ECDF.”