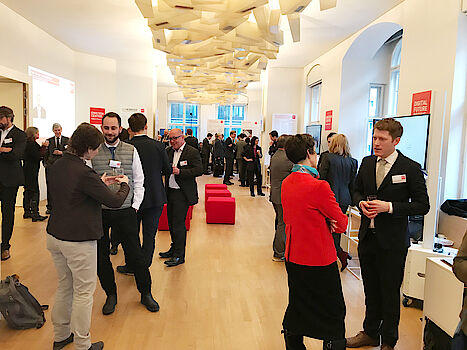 The Einstein Center Digital Future (ECDF) has made an impressive start in the two years since its opening: Highly qualified and competent professors have been appointed. The Center is a role model for the development and implementation of inter-university collaboration. The development of the public-private partnership model has greatly exceeded expectations. These are the findings of the international group of experts who reviewed the ECDF on behalf of the Einstein Foundation Berlin. The Center has now received the report and the experts’ recommendations from the Einstein Foundation Berlin. The Foundation’s Executive Board agrees with the recommendations included in the report.

At the end of March 2019, nine internationally renowned scientists spent two days reviewing the ECDF. The group were introduced to the professors and their research in poster and prototype presentations. In addition, the Executive Board, professors, principal investigators, university boards, fellows, the ambassador, and partners reported on the structures and work at the ECDF. "We are proud and grateful that we were able to express our common spirit and enthusiasm for research at the ECDF in the presentations, poster sessions, and through the partners’ input. The Center's concept and the PPP model as well as our governance were highly praised by the reviewers. They recognized our potential and look forward to continuing to accompany us on our path," said Professor Dr. Odej Kao, Speaker of the Executive Board at the ECDF.

According to the group of experts, the ECDF has succeeded in garnering a positive reputation far beyond the boundaries of Berlin, science, and Germany. With its creative and innovative conceptualization, encouragement of originality, dedication to cooperation, interdisciplinarity, and independence, the Center promises to provide a significant added value not only for those involved, but also for future employers within and outside of academia.

The reviewers were very impressed by the strong support the ECDF receives from the presidents of all Berlin universities and Charité – Universitätsmedizin Berlin. The Einstein Foundation Berlin concurs with the assessment of the group of experts that the positive effects for the supporting universities arising from establishing the ECDF and ongoing cooperation cannot be overstated. "It is a major step forward toward a culture of solidarity, cooperation, and mutual collaboration – aspects that are essential for the future of the Berlin system of science and research," emphasized Professor Dr. Dr. h.c. Günter Stock, Chair of the Executive Board of the Einstein Foundation Berlin.