Professor Dr. Helena Mihaljević (ECDF/HTW Berlin) is part of the “Gender Gap in Science” initiative. On February 18 – 19, 2019 she organized a coordinating meeting at Einstein Center Digital Future (ECDF) to work on the project “A Global Approach to the Gender Gap in Mathematical, Computing, and Natural Sciences: How to Measure It, How to Reduce It?” 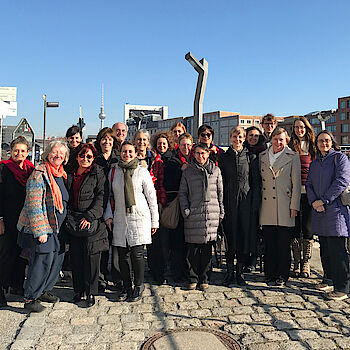 What motivated you to get involved in the initiative?
Many young women leave disciplines such as mathematics or physics at a much higher rate than their male colleagues, and this happens at various stages of their academic career despite their huge talent and interest in these fields. At the same time, the existing data on participation of women in the STEM disciplines is often scattered, outdated, and inconsistent, across regions and research fields, making it difficult to develop suitable actions to effectively reduce the gender gap. As a mathematician and data scientist I wanted to help gather and produce sound, reliable and also open data that can be used by scientific unions and other organizations and individuals to support choices of initiatives and interventions.

What is the aim of the project?
The project aims to establish and analyze a solid and sound data basis that reliably reflects various facets of the participation of women in the involved fields. It is an initiative carried out by eleven scientific organizations, led by the International Mathematical Union and the International Union of Pure and Applied Chemistry, and scientifically supported by various institutes and universities such as the American Institute of Physics or, in my case, the University of Applied Sciences Berlin. In this sense, we are also developing a large interdisciplinary network which helps to exchange experiences and ideas between various fields, and to learn from each other. Furthermore, we are an international collaboration with particular focus on developing countries, and as such the perspectives of scientists from various regions of the world have been actively involved in the project from the start.
We tackle the goal of the project from three different sides – we have carried out a global survey of scientists, we analyze and visualize publication patterns using bibliometric databases, and we will provide a web-accessible database on effective initiatives that aim to enhance the participation of girls and women in STEM.

What is your role in the project?

I am the coordinator of the second task of the project which focuses on the role of gender in publication practices. In a previous research project, my colleagues Lucia Santamaria, Marco Tullney and I unveiled several gender-based effects with high relevance for scientific careers. For instance, we demonstrated that women are heavily underrepresented in renowned journals, measured in different evaluation schemes; in some of the particularly valued journals in mathematics, the proportion of women is around five per cent with no improvement for five decades! Our contribution to the current project builds upon this previous research, adopting research questions and methodology to the other disciplines. In particular, we will analyze the interplay of gender and geographical location when it comes to permanent or temporary mobility, international collaborations and, again, access to important publication venues.

Women scientists from all over the world, for example from France, South Africa, Taiwan and USA, are participating in the initiative. How does the gender gap in science in these countries differ from that in Germany?
The expectations of what "female" careers look like do indeed differ from country to country. In fact, in India and Pakistan computer science is seen as a more suitable major for women than engineering. In former East European countries, the proportion of women in technical and scientific occupations was and still is rather high. In other countries, particularly in South Europe, the proportion of women in STEM fields in college is significant but their numbers decline when it comes to entering the workforce and progressing there. Regarding Germany, there is already a pronounced gender gap at the level of undergraduate education. It is hence of the utmost importance that measures are taken towards increasing the enrollment of young women in STEM-leading secondary-education. Both the survey and the publication analyses will address regional differences and provide additional valuable insights to complement existing insights.

Your first task is a global survey of mathematical, computing, and natural scientists. At your meeting at ECDF you reflected on the project’s status. How is it shaping up?
The survey was open for eight months in 2018 and we collected over 32,000 answers, which is amazing! The response rate is not equally distributed across regions and disciplines: we received a particularly high number of answers from mathematicians but also from physicists and astronomers, in contrast to fields like chemistry or biology (compared to the overall estimates of the number of scientists in those disciplines). Among the regions, Latin America is particularly well represented, followed by Oceania, Africa and Western Europe.
The survey could be answered in seven languages, so the answers need to be translated and then processed and analyzed. This will take some time but we will have a comprehensive picture of the results ready for the final conference in November that will take place at the ICTP in Trieste.

What do you expect from the survey?
The questions in the survey address all career stages, from the initial encouragement to study the chosen subject through experiences during doctoral studies to questions regarding current employment. Various aspects are addressed, such as whether there were any interruptions during the doctoral studies, the reasons for these and what their effect was. Hence we expect both a general and a fine-grained picture of the situation of scientists from several STEM fields and geographical regions.
Some questions allow a connection to be made to the analysis of publication patterns. For instance, we asked respondents how many articles they have submitted to a top ranked journal in the last five years. Answers to this question will help us to better understand exactly where in the publication pipeline the observed bias occurs.
We expect that the survey will uncover areas of inequality that help formulate clear recommendations for unions. For instance, if women are significantly more affected by lack of support (lab space, family support, mentoring, access to top level journals) we want to know: this knowledge can then be transferred to the relevant actors --  unions, policy makers, etc. -- to help take measures to alleviate the problems.

What would you like to see for young female scientists with regard to the gender gap?
Academia should become a place that fosters inclusion and diversity, should embrace new ways of "being an academic", should prioritize academic impact over pedigree, personal connections, or similar, and reward the diversity of thought, creativity and innovation. There is of course no single pathway to improve the situation in academia for young women but various measures could help: transparency of journal acceptance practices as well as hiring and promotion policies; creating more permanent positions; better support for family life; and a critical reflection of the construct of “academic excellence” which is clearly an inherently gendered concept. These would certainly make academia a better place for all of us.