A robot as an ambassador for digital innovations 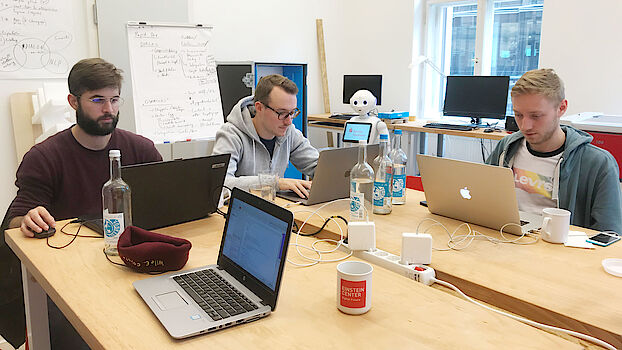 How can a robot inspire bank customers for innovative ideas? How can artificial intelligence be used meaningfully in this context? Since October 2019, students of the Department of Information Systemsat Freie Universität Berlin are working on these questions. They met at the Einstein Center Digital Future (ECDF) for a four-day workshop to develop use cases for different types of customers. The new project by ECDF Professor Daniel Fürstenau is a cooperation with the "Birds Nest", the innovation laboratory of Berliner Sparkasse that exists since 2017.

Pepper stands in the Micro Factory between laser cutter, 3D printer and cutting plotter. The eyes of the white 1.20-meter robot glow and he turns his head to the door as soon as someone enters. "Pepper is programmed by Softbank Robotics to analyze and respond to our human facial expressions and gestures. With her sensors, for example, it recognizes when a person passes her by," explains Daniel Fürstenau.

In the course of the digitalization of the financial sector, Berliner Sparkasse wants to create new ways of communicating innovative ideas. The aim is also to get to know how artificial intelligence can be used. "Four of my students will therefore try out the language skills, interaction with people and emotional abilities that can be realized through artificial intelligence as part of their master's thesis," reports Daniel Fürstenau.

At ECDF, the students are sitting next to Pepper on their laptops and program. "She can already tell how high the Eiffel Tower is", they proudly announce. In this first workshop the business informatics students will get to know and analyse Pepper and his functions.

Matthias Schulte-Althoff is accompanying the project as a research assistant. "It is exciting to see what the students have developed with Pepper in these first days. The integration of existing interfaces, such as Wikipedia or WolframAlpha, and thus the connection of enormous sources to general knowledge can quickly have an amazing effect," he says.

In the coming months, the students will further refine the robot's dialogue system and adapt it to various applications. Current methods from the field of computer linguistics or artificial intelligence will be tested for their applicability. At a later stage, the robot will be used to generate enthusiasm for customer-oriented digital innovations.