Industry Forum: AI and the future of work 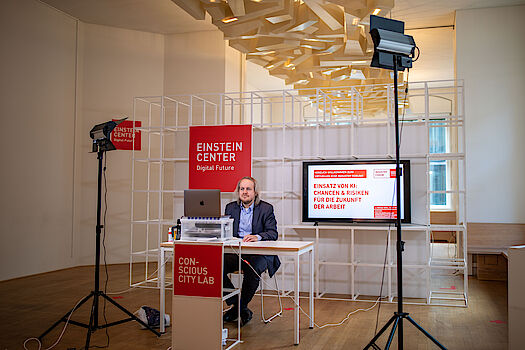 Will artificial intelligence (AI) completely transform the world of work as we know it today? This and other questions were addressed at the sixth ECDF Industry Forum, which took place as a digital format on February 1, 2021 due to the Corona pandemic. This time, the approximately 70 participants highlighted the influence of AI on the working world of tomorrow and discussed new possibilities and conceivable problems.

After the welcome by Prof. Dr. Odej Kao, spokesperson of the Einstein Center Digital Future (ECDF), and organizational information by moderator Tim Kawalun, professors Philipp Staab and Janina Sundermeier got right into the topic: "In public discourse, there is already a lot of discussion about artificial intelligence and its takeover of human tasks, but we still know very little about the influence of AI on the world of work," explained Philipp Staab, professor of sociology at the ECDF and Humboldt-Universität zu Berlin. While some already believe that AI is a new enabling technology - comparable to the invention of electricity - through which other innovations are possible in the first place, Staab rather argues that AI applications should be understood as "isolated solutions" with which only a partial automation of work will take place: "In many cases, AI simply means "machine learning" and this is already being used very frequently without companies perceiving it as artificial intelligence." Janina Sundermeier, associate professor at the ECDF, emphasized that diversity is already important in the implementation of AI, so that processes that are later automated do not discriminate. However, she said, the use of AI in companies generally offers the opportunity to achieve a deeper level of diversity, far beyond gender equality.

In the pitches that followed, other benefits of AI were addressed. Oliver Giering kicked things off with a joint research project with ECDF professor Stefan Kirchner. In the project, their research focuses on Weak AI, i.e. systems that solve concrete application problems, such as widespread speech recognition, which has long since become part of everyday life. This form of artificial intelligence is more about recognizing patterns and regularities and deriving actions from them than completely replacing human work. Anastasia Danilov, ECDF Professor of Organizational Economics of the Future of Work, discussed benefits and challenges of using AI-based tools for human resource management. While the data foundation is often good, AI-based tools often fail to address the question of what makes a good employee. The quality of AI-based HR decisions also depends heavily on the training data, explains Anastasia Danilov: "It may happen that the AI only selects candidates who are very similar to current employees - but that would not always be in the company's best interest. However, it may also be that the AI better identifies candidates who do not fit into the usual scheme." Finally, Anastasia Danilov gave insights into her recent survey on the use of AI in companies (go to the survey here).

ECDF professor Helena Mihaljević's research starts a little earlier and examines the influence of non-inclusive language in job ads. Again, the goal is to identify certain patterns, Mihaljević explains, as job seekers read the online ads and evaluate whether their own profile fits on them. "Certain words make whole segments of our population feel out of touch: If a company advertises a job for programmers and it talks about coding ninjas, women are more likely not to identify with it." AI could analyze job ads in advance and help to formulate texts in a more neutral way to create more diversity among applicants, she said. ECDF professor Max von Grafenstein rounded out the short scientific presentations with ethical and legal questions about indirect discrimination in hiring processes. While direct discrimination on the basis of skin color, gender or religion is now a familiar concept to many, indirect discrimination is less familiar, although it also has far-reaching consequences. Max von Grafenstein holds the professorship for "Digital Self-Determination" at ECDF and illustrates indirect discrimination with a well-known example: "If an employer decides not to hire applicants from the Bronx, a New York borough, at first glance there is no discrimination," explains von Grafenstein. But when you take a closer look, it becomes clear that - before gentrification took hold here a few years ago - the Bronx was a borough of New York in which the majority of people were black: "So excluding candidates from the Bronx is discrimination through the back door - that is, indirect discrimination".

The breakout sessions that followed were used by professors and participants to exchange ideas on more specific issues and to discuss further joint projects. At the end of the event, moderator Tim Kawalun introduced another innovation at the ECDF, the TV studio: "Of course, we hope our Industry Forum can take place as a face-to-face event again in the future. However, our next Industry Forum on the topic of digital health on April 26, 2021 will again take place as a digital format in our new TV studio, which we will also be happy to make available to our professors and partners," emphasizes Kawalun at the end.