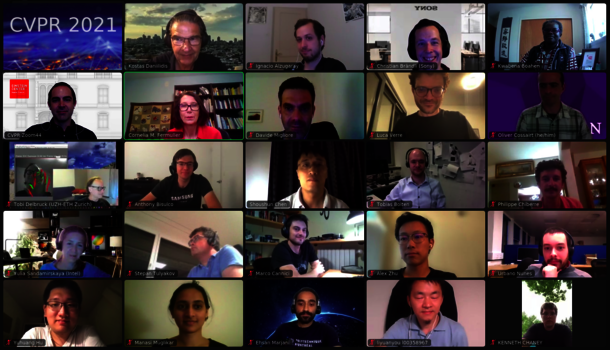 ECDF-professor Guillermo Gallego (TU Berlin) was one of the organizers of the latest workshop on event-based vision, a technology which allows acquiring visual information faster and more with less data redundancy. The virtual workshop was part of the IEEE conference on Computer Vision and Pattern Recognition and took place on June 19, 2021.

The workshop focused on event-based cameras, smart cameras, and algorithms processing data from these sensors. “While regular cameras work with frames and distinctive shots, event-based vision is bio-inspired: like our eyes, event-based cameras collect the brightness changes in the scene rather than the whole scene (full images) over and over again. This is possible due to new sensors”, Gallego explains. Among other advantages like microsecond temporal resolution, low latency, very high dynamic range, and low power consumption, this means less unnecessary data. They also allow taking footage under difficult conditions, for example tracking a baseball in the moonlight.

The workshop is the third one in a series that Prof. Gallego and colleagues organize every two years at major computer vision and robotics conferences, such as ICRA (2017) and CVPR (2019, 2021). It consisted of 22 presentations and discussions with researchers from leading universities and companies working on this revolutionary, early vision technology. “Novel vision sensors, such as event cameras and pixel processor arrays, perform massively parallel processing near the image plane. Thus early vision computations are carried out on-sensor, endowing the resulting systems with high speed and low-power consumption capabilities, which ultimately leads to new embedded vision applications in areas such as robotics, AR/VR, automotive, IoT, surveillance and many more”, explains the professor. “Event-based vision is an emerging field, and this workshop series is like Homecoming, gathering us to discuss and research on novel camera technology (hardware) and visual data processing methods (software)”, Gallego says. The videos and slides of the talks are now available from the workshop’s web page //here.