Three new professors at the ECDF 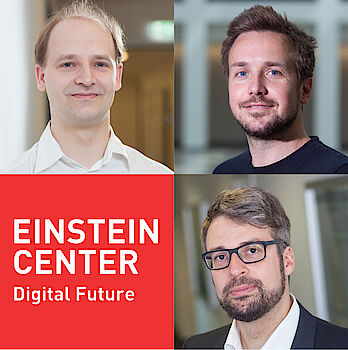 The Einstein Center Digital Future (ECDF) is pleased to announce another stage in its growth: three more professors have been appointed to positions at Charité – Universitätsmedizin Berlin and Technische Universität Berlin. And, in addition, the ECDF Coordinating Office has a new head.

On 1 June 2018, Professor Dr. Sebastian Köhler started his work as Junior Professor of Methods for Digital Phenotyping at the Charité and the Berlin Institute of Health. This junior professorship is associated with the ECDF. Professor Dr. Jan Nordholz holds the ECDF joint professorship of Secure and Trustworthy Network-Attached System Architectures at PTB – National Metrology Institute of Germany and Technische Universität Berlin. The third newly appointed professor is Professor Dr. Stefan Kirchner. He heads the subject area of Sociology of Working Worlds’ Digitalization at Technische Universität Berlin. His professorship is funded by the Federal Ministry of Labour and Social Affairs.
Over the coming months, the ECDF expects more professors to be appointed and to take up their work at various institutions, including the Berlin University of the Arts and the University of Applied Sciences (HTW Berlin). At present, 13 young professors are conducting research in the areas of “Digital Health”, “Digital Industry and Services” and “Digital Society and Humanities”, as well as in the core area “Digital Infrastructure, Methods and Algorithms”.
Amaya Steinhilber is the new Director of the ECDF. The 37-year-old started her work in mid-May. “It is fascinating to see Berlin’s universities working together and pulling together on this project,” she says. “I am looking forward to the research ideas of our professors and would like to further develop the interaction between our various partners.” Prior to her current position, Amaya Steinhilber acted as Scientific Director of the cluster of excellence “Image Knowledge Gestaltung. Interdisciplinary Laboratory” at Humboldt-Universität zu Berlin.

About the Newly Appointed Professors

Professor Dr. Sebastian Köhler studied bioinformatics at Freie Universität Berlin, where he also completed his doctorate before taking up a position as postdoctoral researcher at Charité. Professor Köhler’s research focuses on three topics: firstly, he is pushing forward with the development of an ontology, that is, a standardized, comprehensive and computational description of phenotypic characteristics of diseases, particularly so-called rare diseases. Secondly, taken together with data from international partners, these standardized descriptions are intended to form a database that will enable searches that are both comprehensive and proficient. The third research area combines phenotypic data with data from precision medicine (genome sequencing of individual patients) to gain new insights, especially in the field of rare diseases. “On average, patients suffering from rare diseases wait 5 to 30 years to be diagnosed and typically need to see three or more doctors during this time,” he says. The synchronization of patients’ phenotypic characteristics with the data of their exome or genome sequencing could make the diagnostic process far easier.

Professor Dr. Jan Nordholz initially studied mathematics and physics for a few semesters at Technische Universität Berlin before switching to the subject area of computer science, in which he later acquired his doctorate and took up his first postdoctoral position. Today, the computer scientist’s research is mainly concerned with the construction of security software that guarantees a secure network architecture by ensuring, among other things, that different systems on a computer are run securely and separately from one another. “An example in this regard would be a smart phone on which two different user environments are installed – one in-house and one private. It is essential that the data of the two environments is securely separated so that a potential virus caught while privately surfing the Internet cannot spread to the company’s internal user environment and spy on trade secrets,” says Professor Nordholz.

According to Professor Dr. Stefan Kirchner, all-encompassing digitalization is leading to a paradigm shift in the working world. Among other issues, the 38-year-old is investigating how market platforms such as “Uber”, “Airbnb” and “eBay” are changing the working world, and he places these developments in an international context. These digital platforms do not function as employers, but provide an infrastructure that enables third parties to enter into competition with existing markets such as the taxi market or the retail trade. This also results in new definitions of work: making one’s private car available or selling things on Ebay is in fact a form of work. However, it takes place beyond the boundaries of the formally organized work area with its minimum wages, working time regulations and the like. Such platforms are booming and rapidly gaining great market power. “This can have considerable effects on employment systems, market regulations or even governmental options for regulation,” explains Professor Kirchner.