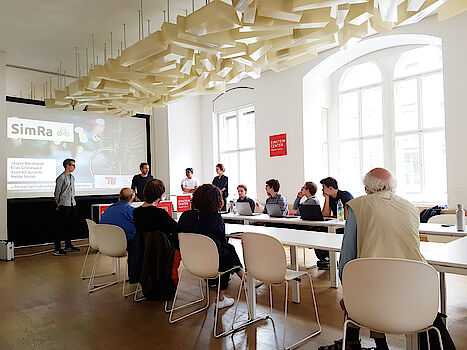 Accident black spots, traffic density, main routes: Students of the Mobile Cloud Computing department of the TU Berlin have analyzed and evaluated the first data of the SimRa App. They presented their interim results at the Einstein Center Digital Future on July 15, 2019. The research project "SimRa – Safety in Cycling" by Prof. Dr. David Bermbach (ECDF/TUB Berlin) aims to gain an overview of dangerous situations in Berlin cycling.

Where are most cyclists in Berlin and when? On an animated city map of Berlin, the students illustrate where the main traffic flows move on the bike. The intersections where cyclists had to wait a particularly long time are also shown. The SimRa app uses acceleration sensors to record movements and vibrations. Cobblestones, kerbs or the structural condition of many cycle paths are a challenge in the detection of near misses. In addition to near-accident accumulation points, roads with particularly poor subsoil quality can also be clearly identified. In the project, the students used Google Streetview to check this – one example is the Falkensteinstrasse in Kreuzberg.

"The presentations have shown that we can basically identify hazard focal points. One example is Edisonstrasse in Schöneweide, where there are regular conflicts with parked cars. In addition to near-dooring, cycle path parkers force cyclists to avoid the dense traffic. In addition, tram tracks are also laid there. Another example is Paulsborner Straße in Wilmersdorf, where the construction of bicycle protection strips and parking strips regularly leads to very dense overtaking processes. In the coming months, we will concentrate on improving the automatic detection of near misses in the app and programming further evaluation tools. But we still need more users to help us cover the city," says Bermbach.