"In the future, digital identity should be approached more from an interdisciplinary perspective" 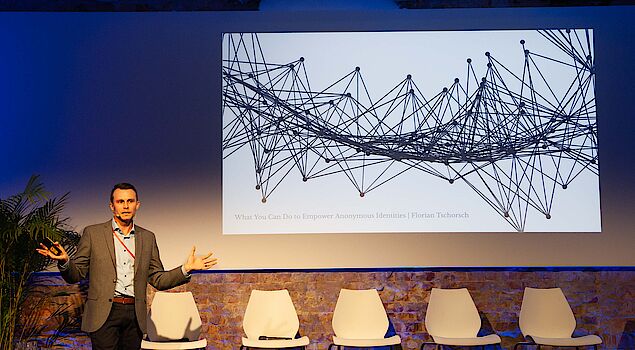 Leaders in culture, politics, academia and industry from 23 countries met on November 8 – 9, 2019 in Berlin for the World Frontiers Forum (WFF) – including representatives of the Einstein Center Digital Future (ECDF). Prof. Dr. Odej Kao, Prof. Dr. Florian Tschorsch, Prof. Dr. Max von Grafenstein and Sophie Marquitan discussed the topic of "Digital Human Identity" with the other participants. In his keynote, Florian Tschorsch gave insights into his research area of anonymous Internet communication. Simone Harr spoke with him afterwards about the WWF.

At the WWF, you explored the question of what we can do to strengthen anonymous identities on the Internet. What possibilities do we have?
Tschorsch: In my opinion, the Tor network is currently the best existing solution for establishing anonymity online. Technically, we aim to make all users look the same to external observers; the larger the user base, the stronger the anonymity. What is often forgotten, however, is that anonymous communication is also about diversity. If data traffic is only produced by dissenters and activists, their protection is weaker. By using Tor, anyone can generally counteract this by appreciating data protection-promoting technologies. With my key-note at the WFF I wanted to contribute to the reduction of the so-called "Nothing to Hide" argument.

What exciting and perhaps surprising encounters did you have during the WFF?
Tschorsch: As a computer scientist, I have a special, thoroughly limited view of digital identities. It was clear to me that the concept of identity can be viewed much more comprehensively and that, for example, self-image and cultural influences can also be taken into account. During the two days of the WFF, however, I became very aware of the dimension once again and the various contributions and discussions challenged me to think beyond my discipline.

Where will the journey to the digital identity of people go in the future?
Tschorsch: The topic is so big that I can't answer it. But I also believe that formulating concrete goals was not the primary intention of the WFF. The intentions were much more modest. So, one of the methods was so-called "nudging", i.e. giving the participants impulses and new perspectives in order to develop further. The focus is more on a happy coincidence (serendipity), which worked surprisingly well for me. However, I can say one thing with conviction: the topic of digital identity should be dealt with more interdisciplinary in the future.