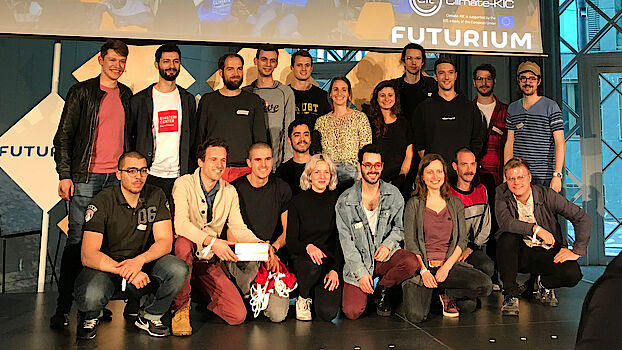 “Flowmetrics” developed a solution for a dynamic urban flood flow management for cities. With this idea the team won the Challenge of the Einstein Center Digital Future (ECDF) at Climathon Berlin. More than 120 participants met last weekend at Futurium to create ideas to address problems related to climate change.

Andrea Cominola is Professor at ECDF and hosted the Challenge “Extremely resilient urban water Systems”. The question was: How can we enhance the resilience of Berlin to increasingly frequent water-extreme events? “We were really impressed what these guys did in less than 24 hours”, he said.

On Friday evening, students, developers, entrepreneurs, scientists, programmers, and citizens came together. They had the choice between four different challenges. Around 20 participants joined the ECDF task. Here, they met the experts Felix Biessmann and Sangyoung Park from ECDF, Niklas Boers from Potsdam Institute for Climate Impact Research (PIK) and Jasminko Novak from European Institute for Participatory Media (EIPCM). After forming the teams, the intense part started. The Berliner Wasserbetriebe provided related data. “It was so much fun to work with the teams on their ideas and questions. I left at midnight and came back at 10. I saw a lot of improvement. So, they really worked hard at night”, Andrea Cominola said.

Odej Kao, Speaker of ECDF, was very impressed by the atmosphere at the Climathon: “It was great to see with how much joy and passion everyone worked together and how our professors contribute to the important topic of climate change.”

After a midnight yoga session, an outdoor workout and a last coaching the teams had to finish their pitch decks. “Flowmetrics”, “Floodcast”, “Urban Resilience Scheme” and “Crowd Weather” presented their solutions to the jury. Regina Gnirss (Berliner Wasserbetriebe), Gerardo Anzaldua (Ecologic Institute), Andrea Cominola, and Sergio Lucia (both ECDF) were really surprised by the outcome. “We were so happy with all solutions, because they really fit in the challenge. Therefore, we as Berliner Wasserbetriebe offered to all teams to have a guided tour through our water treatment plants”, said Regina Gnirss. “We had a nice discussion with the members of the jury. The solution that we actually selected is the one with a very nice compelling story from the definition of the problem to the definition of a solution along with its feasibility and scalability”, said Andrea Cominola. The idea engages different stakeholders – society, users, and institutions.

At the Festival of Ideas, the teams of Climathon Berlin pitched their ideas on the huge stage to the public. Valentin Rudloff represented the winning team “Flowmetrics”, who wants to support cities in connecting urban high flood risks areas with nearby areas that can withstand a lot of water during floods. Each area’s water capacity is quantified using a distributed network of sensors as well as satellite imagery wherever possible. “To do so, we use cheap, mobile and reusable infrastructure and the involvement of local citizens in this whole process to tackle flood management in cities together. Thereby cities can reduce flooding, health risks and also damages. Just a little tip for you guys – additionally to freeing our streets from cars, let’s free our streets from flooding”, he said. Together with Alexandre Leduc and Athanasia Nikolaou he worked through the night.

“We were inspired by the idea of ¢Flowmetrics¢ to engage the citizens to take responsibility and be a part of the solution – a very new approach we would like to discuss with the teams”, said Regina Gnirss. So, the jury gave the winners two opportunities: A technical discussion with experts by the Berliner Wasserbetriebe so that the feasibility and how to follow up can be evaluated. And a meeting with experts related to climate adaptation to Berlin from the Ecology Institute. “Here is where we can tackle the solution from different point of views and see how feasible it is to pursuit not only from a technical point of view, but also in terms of expectance”, explained Andrea Cominola.

The Climathon is a worldwide 24-hour climate hackathon.Climate-KIC GmbH and Urban Impact organized the event with several partners in Berlin. (sim)