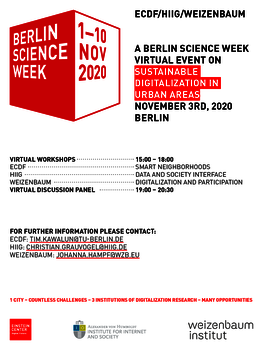 "1 City– Countless Challenges – 3 Institutions of Digitalization Research – Many Opportunities": Under this motto, the Einstein Center Digital Future (ECDF), together with the Alexander von Humboldt Institute for Internet and Society (HIIG) and the and the Weizenbaum Institute for the Networked Society (WI), is organizing an event on "Sustainable Digitalization in Urban Areas" as part of the Berlin Science Week 2020 on November 3rd, 2020. The event will consist of three virtual workshops focusing on different aspects of digitalization in urban areas. This will be followed by a joint virtual discussion panel presenting the results of the workshops and discussing the overarching question of how to facilitate sustainable digitization in cities like Berlin. The virtual panel discussion will be available to a broader public via livestream.

The first part of the event (starting at 3 pm) consists of three virtual workshops. The workshops are aimed at researchers as well as representatives from politics, civil society and businesses, in order to facilitate an interdisciplinary and cross-sectoral dialogue on the above-mentioned topics. The workshops will focus on the following aspects of digitization in urban areas:

In the second part of the event, which starts at 7 pm, a joint virtual discussion panel will take place. In the moderated panel discussion, representatives from the three workshops will present the results of these workshops and discuss the overarching question of how sustainable digitialization can be made possible in cities like Berlin.

The virtual panel discussion will be broadcasted via livestream.

Further information on the content as well as participation in the workshop "Smart Neighborhoods" organized by the ECDF can be found //here.