Book presentation: "Adaptation. Leitmotiv of the Next Society" by Philipp Staab 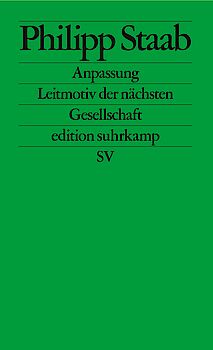 On November 15, 2022 ECDF Professor Dr. Philipp Staab will present his new monograph "Adaptation. Leitmotiv of the Next Society" at the Literaturhaus Hannover. The event starts at 7:30 p.m., tickets cost 12 euros or reduced 6 euros.

Is the maxim of individualism reaching its limits?

Modernity was dominated by the belief that the world could be shaped and that progress would ensure a better tomorrow. But global warming, the growth crisis and subjective overload have shattered this optimism. Today, the primary concern is to mitigate the catastrophe.But even if this succeeds, we will have to deal with change. Questions of self-preservation will then override those of individual and collective self-development. Adaptation becomes the leitmotif of society. The Corona pandemic has also shown that, in the face of interdependence and ecological dangers, we can no longer pay homage to boundless emancipation. Instead, according to Philipp Staab, the next society will be primarily concerned with stabilizing an order that is becoming precarious. This, however, results in a crisis of the relationship between self and time, to which we as a community, but also the political parties, must find an answer.

Philipp Staab, born in 1983, is a professor of the sociology of the future of work at Humboldt University in Berlin. In 2021, his book Digital Capitalism was published, for which he was awarded the Hans Matthöfer Prize for Economic Journalism.

Andrea Schwyzer, born in Zurich in 1980, is a freelance radio journalist and has worked for Swiss radio and television, among others. She has lived in Hanover since 2012 and works as an author, reviewer and presenter.